Today, the 20th of November, marks artist Corita Kent’s birthday.  Read all about her in this excellent post from The Brooklyn Rail.

Corita Kent, also known as Sister Mary Corita, gained international fame for her vibrant serigraphs during the 1960s and 1970s.  A Sister of the Immaculate Heart of Mary, she ran the Art Department at Immaculate Heart College until 1968 when she left the Order and moved to Boston.

Corita’s art reflects her spirituality, her commitment to social justice, her hope for peace, and her delight in the world that takes place all around us.

And for fellow artists, check out her inspiring list of art department rules: 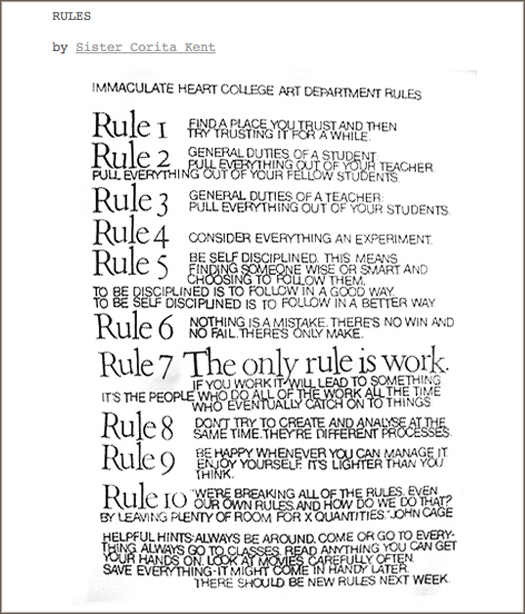 Alexander Rotter, Co-Head of Sotheby’s Global Contemporary Art Department, commented: “It has been a wonderful start to our week of Contemporary Art sales, with the running total now above $460 million, and a very strong day sale yet to come. Having known and admired Jasper Johns’ final encaustic Flag for decades, we were thrilled to see it establish a new record for the artist at auction. Tonight’s sale was anchored by The Schlumberger Collection and the outstanding prices achieved for works that had been tucked away in that legendary collection for a generation, including Mark Rothko’s sublime No. 21 (Red, Brown, Black and Orange) and Jean Dubuffet’s masterful Cité Fantoche, which also set a new record. Sotheby’s had the unprecedented privilege of offering three major canvases by Rothko from key moments in his career this week and the results were spectacular.”

Jasper Johns’ encaustic Flag, one of the most influential paintings of the last century, completely soared over its high estimate (coming in at $36,005,000 with the initial estimate ranging between 15M – 20M).  Rothko’s No. 21 (Red, Brown, Black and Orange), another star of the auction, sold for nearly $45,000,000.  However, No. 21 went for half as much as the Rothko painting Orange, Red, Yellow, which sold for $86.8 million during an auction at Christie’s in 2012,

Louis Bourgeois’ bronze sculpture Spider I sold for just over $7 million and an untitled work by Cy Twombly sold for more than $5 million, both over the high estimate.  Other works did considerably well, though, according to the New York Times, “of the 78 works in the auction, 11 failed to sell. The auction totaled $343.6 million, just squeaking above its low $323.1 million estimate, but far short of its $418.6 million high” 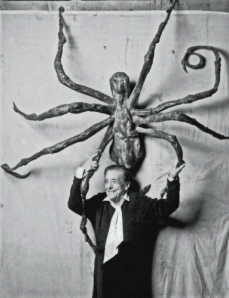 On the evening of November 11th, Sotheby’s in New York will be holding an auction featuring a dizzying array of remarkable artworks created by some of art history’s most prominent figures.  We’re curious to see how much art collectors are willing to spend in order to acquire one of Jasper Johns’ flags (Sotheby’s estimate $15,000,000 to $20,000,000) or a work by Rothko, or Gerhard Richter, or Louis Bourgeois, or Andy Warhol, to name a few.

Sotheby’s Contemporary Art Evening Auction on November 11th will present a collection of spectacular landmarks of recent art history. Surveying the major developments of Contemporary Art over the past six decades, this auction will offer truly rare and prestigious exemplars of Abstract Expressionism, Pop Art, Minimalism and Postmodernism alongside various groundbreaking paintings and sculptures by the most influential artistic innovators of our times.

We’ll know the auction results next week.  Until then, let’s take some time to ooh and aah over this exclusive preview of the fantastic Shlumberger Collection…