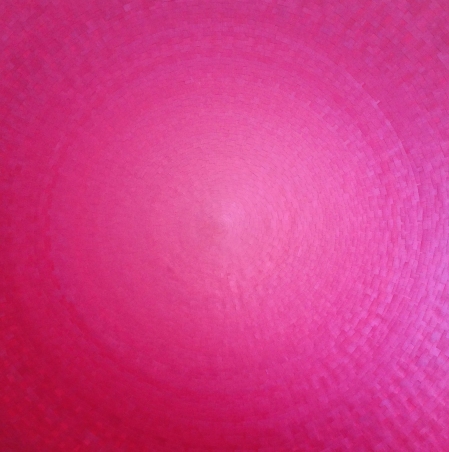 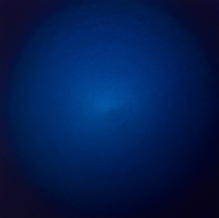 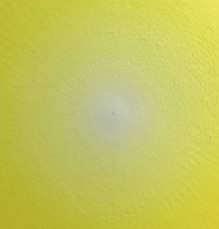 Born in 1968 in Seattle, WA, Lisa Bartleson is a mixed-media artist who currently lives and works in both Los Angeles and Northern California.  Her work is inspired by the Light and Space movement from the 1960s and 1970s, which originated in Southern California. Bartleson received a B.A. in Biology at the University of Northern Colorado and was a scientist with a pharmaceutical company as she pursued her artistic path.  This is evident in her incredible ability to create nearly seamless gradations of color in each piece. 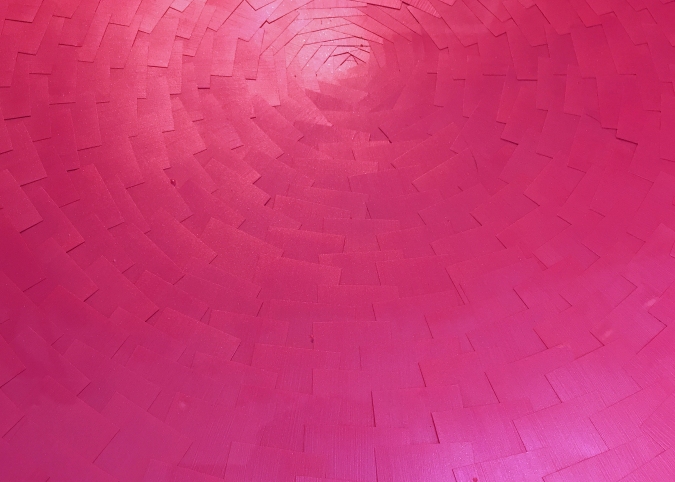 For her ongoing Sphere series, Bartleson paints many strips of Mylar (a clear plastic) starting with thinner pieces (used near the center of each sphere) and getting wider towards the outer layers on each piece.  These strips are taped vertically to her studio walls as she paints them.  Picture a paint bucket with a neutral colored paint.  She slowly adds pigment to the bucket as she paints each strip of Mylar on the wall.  To begin the sphere, she cuts small squares from each strip and glues them down in a circular motion starting at the center.  These cut squares slowly go from light to dark as she knows just when to move the next strip of Mylar, which is painted with a darker pigment.  She continues cutting these squares and gluing them over the layers beneath in a repetitive circular movement.  The further out she goes from the center, the darker the color gets.  For the final step Lisa pours a liquid resin over the surface to seal all of the pieces of painted Mylar.  The surface is smooth like glass after the resin.

Utilizing pigments that interact with the viewer’s perception of light and color, Bartleson attains work that shifts and reveals itself as the person observing moves to investigate. This forces a kinetic relationship between the viewer and the painting. In her spheres, she focuses on a center point of luminescence that is intended to capture the viewer and perhaps move them to a place of contemplation and meditation.

“When I’m constructing the pieces, it’s a lot of hand-made repetitive motions that over time are very meditative. Sometimes the process has the potential to be so pristine, yet elements are introduced that contradict the process and throw it off. As you paint hundreds of individual strips there is always an element of slight imperfection because of the fact that it is handcrafted.”

Bartleson’s work is in many prominent public and private collections around the world, including the Museum of Art and History in Lancaster, CA and Pio Monte della Misericordia in Naples, Italy. Bartleson completed an artist residency at Art 1307 in Naples, Italy in 2013. 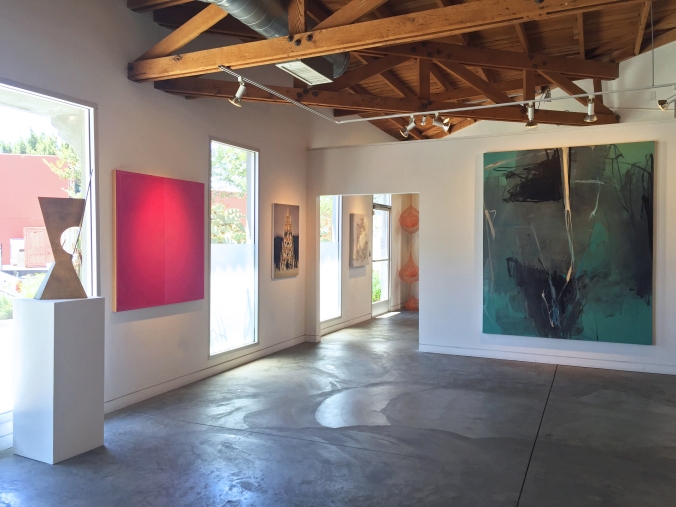 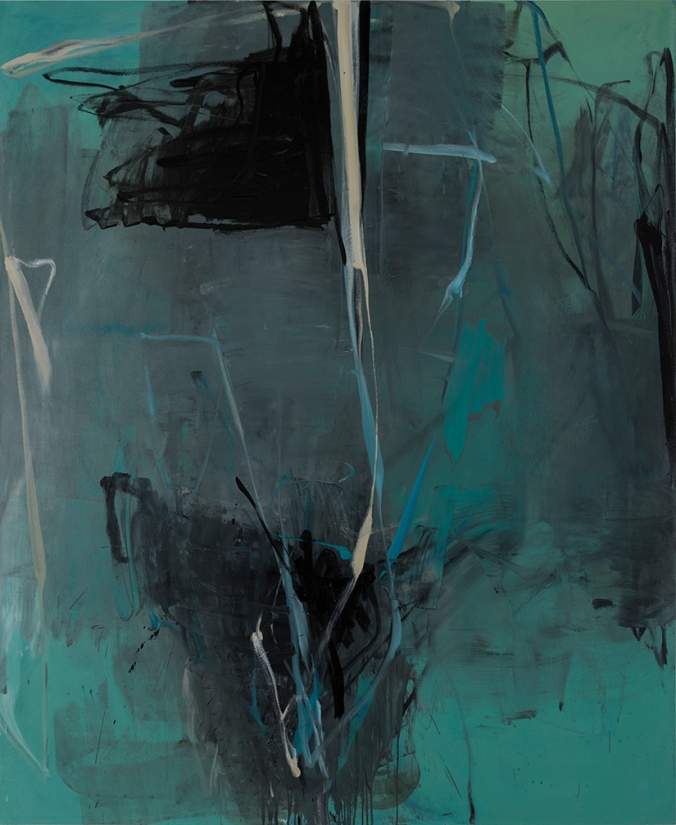 Next in our Artist Spotlight series is FP Contemporary artist Tom Lieber. This is a telling of the beginning of an outstanding art career, one that most artists can only dream of…

Tom, who is originally from St. Louis, Missouri, moved to Berkeley, California in 1975 after finishing his BFA and MFA at the University of Illinois.  Tom’s career took off in 1982 when a woman named Diane Waldman traveled to California.  At the time, Diane was the deputy director at the Guggenheim Museum NY (Tom said she was known as a “radical curator”). She was traveling the country in search of young artists she thought would be the next generation of talented emerging artists (see the link below to read the NY Times article about the exhibition).  While at another artist’s studio, Diane saw a book featuring twenty young painters, including Tom, from the Bay Area. I think he said he was in the black and white section near the back of the book, but he was the only artist she found interesting. Tom said she quickly identified that his paintings were structurally sound and she “got” them.  Diane’s search culminated with an exhibition at the Guggenheim featuring Tom and ten other artists in 1983.  The Guggenheim purchased two of Tom’s paintings, one in 1983 and another in 1985.

John Berggruen was (and is) a very established art dealer in San Francisco.  At the time, he only represented well known artists like Frank Stella and Helen Frankenthaler, but when he heard about the buzz around Tom, he went to Berkeley to visit Tom’s studio.  He signed him and Tom became the first emerging artist John had ever represented.  This launched Tom again.  Next thing Tom knew, The Metropolitan Museum NY purchased a painting from the “Crocodile Period” from Berggruen and Tom was like “what the heck is going on?”  Some artists fight their entire career to be “discovered” and never have a chance to grab that brass ring. Things began to really happen for him and his career.  Marty Margulies, who is a huge collector based in Miami and collects the likes of Picasso, Rothko, etc., fell in love with Tom’s paintings and has seven of them in his collection.  Marty eventually had to create a museum to house his works and it is located in the Wynwood art district in Miami (it is rumored that the collection is worth just shy of one billion dollars). Most of Tom’s paintings are in Marty’s private collection.

Over time, other collectors who owned and loved Tom’s paintings, but ran out of room in their own homes, began donating/bequeathing works to MOCA Los Angeles, SFMOMA, High Museum of Art in Atlanta, the Tate Modern in London, etc.

Attached is a link to the NY Times article written about Tom’s first Guggenheim exhibition:

A book is being written about Tom and his paintings, including this exciting period in Tom’s life when his career skyrocketed. Tom Lieber currently lives and paints between Los Angeles and Kauai. His recent paintings are heavily influenced by the environment in Hawaii. 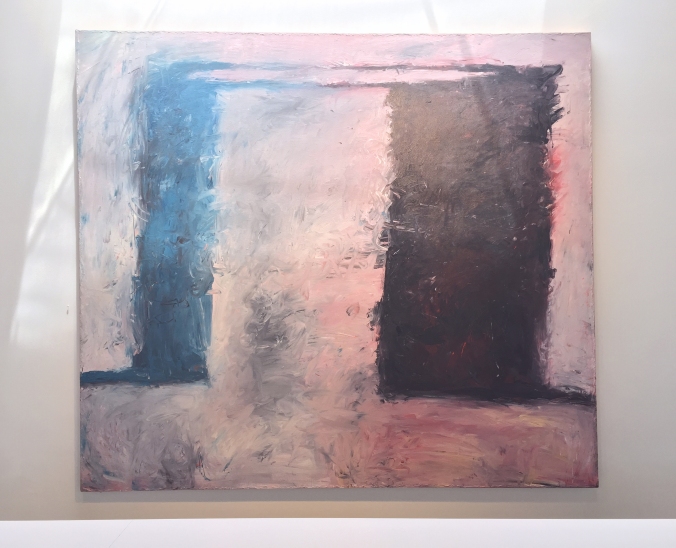 From September through late October 2017, Tom will be showcasing his retrospective solo exhibition, “1977 Onward”, which showcases paintings from various points of his life, at FP Contemporary. 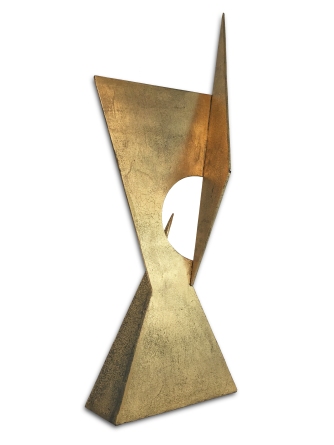 “I’ve been asked many times to explain my art, but don’t think that there is an explanation, as such. I can say, however, that I began with the human figure and ended up with geometry, which I love. It’s not an easily understood transition, or even one that I fully comprehend. Suffice to say that I don’t think it will shed more light going beyond Picasso’s simple but profound reflection that ‘It’s the leap of the imagination.’

With the exception of some photographic work, everything I have done for the major part of my career has been based on a geometric concept. It never becomes tiresome and I continue to find new ways in which to express its truth and universality. Every new project is like the first: challenging, fulfilling and exciting.”

Gold was born in 1935 in Austin, Texas. She attended the University of Texas with a major in Elementary Education and a minor in Art History. After completing her studies, she entered the tutelage and apprenticeship of sculptor Octavio Medillan in Dallas, Texas in the late 1950’s. Since then, she has traveled the world extensively, studying and lecturing. Inspired by the cultures she has observed throughout her years of travel, her geometric sculptures resemble paper origami despite their steel construction. Although her large-scale outdoor sculptures appear to have come into existence effortlessly, they can weigh in the range of thousands of pounds to seven tons.

Gold creates paper and cardboard models at her studio in Venice, CA and while she travels. Once a model is commissioned to be created in large scale, she begins each sculpture with rectangular sheets of steel, which she deconstructs into geometric shapes and then reconstructs by welding the pieces together with intention. The thickness of the steel depends on the height of each sculpture. The sculptures represent duality and contrast. Gold feels that she is feminine, while the geometric nature of her creations is more masculine. “It could be male-female, but it doesn’t have to have that connotation. It could be yin-yang, or positive-negative. It is two sides and two points of view to any situation. It’s a balanced feeling within yourself”, says Gold.

Gold turned the male-dominated sculpture world “on its head” by winning countless public arts commissions beginning in the early 1970’s. She became associated with MADI, an international abstract art movement, which she claims opened many doors for her. In 2005, Gold was honored with a major retrospective exhibition at the Casal Solleric Museum, a historic castle in Palma, Spain on the island of Mallorca. Exhibitions featuring the work of Columbian artist Fernando Botero and Mexican painter Frida Kahlo graced the same castle following Gold’s retrospective exhibition.

Gold’s sculptures are placed both outdoors in year-round environments as well as interior environments.  Whether large scale or on a smaller scale, her sculptures have a timeless sensibility and a resounding impact.  Gold loves to create site-specific commissions for each client’s individual needs.  These commissioned sculptures range from four to twenty eight feet in height and are painted in various colors or sometimes remain unpainted for a more organic expression.

In 2014, Gold was presented with the prestigious XAM award. She is the 13th recipient of the Premi Xam d’Arts Plàstiques (Xam Award of Plastic Arts), an award created as homage to the memory of Mallorcan artist Pedro Quetglas Ferrer “Xam” who passed away in 2001.

While Betty Gold turned 81 in February 2016, her career has never lost momentum in the approximately 50 years she has worked as a professional sculptor and painter.